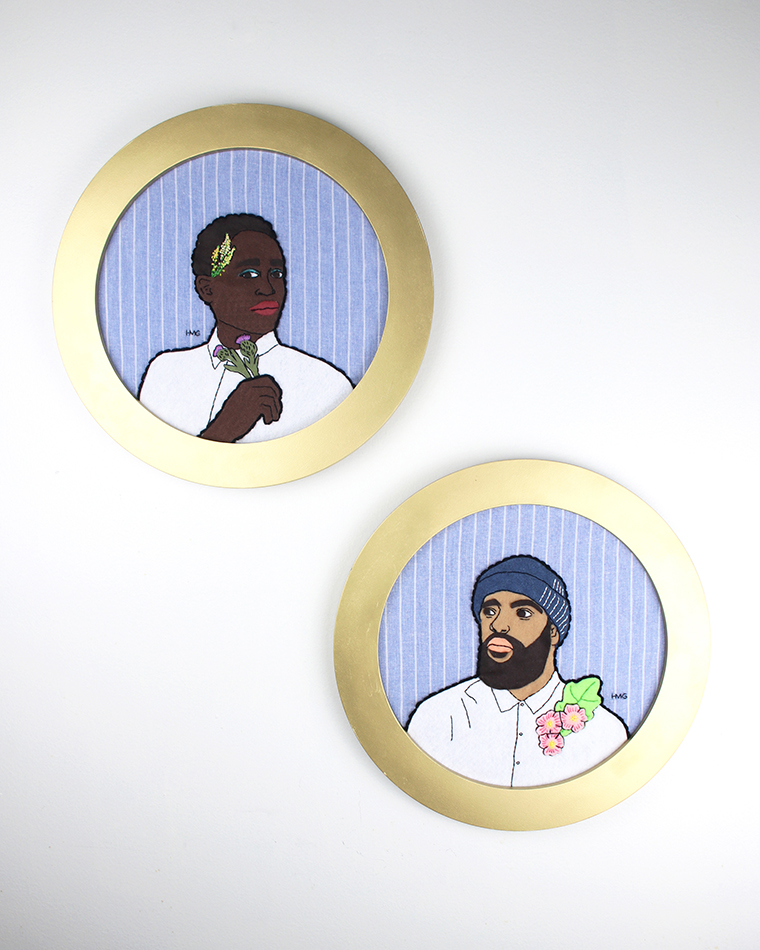 “A Wound to Heal” is made entirely of fabric, felt, yarn, and embroidery floss and is a botanical statement about the civil rights movement in which we currently find ourselves. I began making these pieces when I learned the jarring news that we have not grown enough in sixty years (since the last civil rights movement) as a people that we can lay to rest the idea of racism. The fact that the mindset still exists (or ever existed) is, to me, mind-boggling.

The fact that any one group of people, or individual for that matter, should ever be made to feel unwanted, unloved, unappreciated, unvalued is unacceptable. I have chosen to make “A Wound to Heal” a botanical statement by using the symbolism/meaning of plants to convey the injustice people of darker skin than myself have endured, but to also contrast it with the truth of their character. For instance, in the piece with the man’s portrayal, he is wearing an oak leaf and eglantine roses. Eglantine roses mean “I am wounded.” Soldiers would send them home to their loved ones when they were hurt in battle. Despite this man’s wounds that he has suffered at the hands of racism, his oak leaf cannot be dismissed. It must be part of the story. Oak leaves mean “strength, endurance, and honor”. This man that has been wounded is one that should have been and should currently be respected. The portrayal of the woman frames up another botanical statement. She is displayed with thistle and mignonette. Thistle means “the defiant ability to flourish  in spite of efforts to remove it.” So many generations have suffered so much hardship due to the color of their skin. Despite heartless efforts to defeat or even remove such people, so many have stood strong, lived out their message in an awe-inspiring way, and have proved themselves over and over to be a people of great character. The mignonette that she wears next to her face means simply but largely: “worth.” She wears it very close to her mind and her vision.